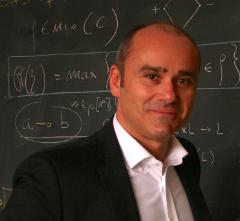 Roberto Giacobazzi received the Laurea degree in Computer Science in 1988 from the University of Pisa, and in 1993 he received the Ph.D. in Computer Science from the same university, with a Ph.D. thesis on Semantic aspects of logic program analysis, under the supervision of Prof. Giorgio Levi. From 1993 to 1995 he had a Post Doctoral Research position at Laboratoire d’Informatique (LIX), Ecole Polytechnique (Paris) in the equipe Cousot. From 1995 to 1998 he was (tenured) Assistant Professor in Computer Science at the University of Pisa. From May 2000 until now he is Full Professor in Computer Science at the University of Verona. The research interests of Roberto Giacobazzi include abstract interpretation, static program analysis, semantics of programming languages, program verification, abstract model-checking, program transformation and optimization, digital asset protection, code obfuscation, malware detection, software watermarking and lattice theory. He has been Program Chair of SAS, VMCAI, of workshops in programming languages and language based security, and General Chair of ACM POPL2013. He is currently in the Steering committee of SAS and ACM POPL. From 2006 to 2012 he has been Dean of the College of Science of the University of Verona. He is now in his sabbatical year at IMDEA Software Institute.